Skip to content
Contents show
What’s in the box?
Marantz PM7000N
Marantz NR1200
Which is better?

Marantz is known for producing some of the best amplifiers and receivers in the world. In this article, we will be comparing two very popular products, the Marantz PM7000N vs NR1200. We will be going over their features, benefits, drawbacks, overall quality, setup, and which one best suits you.

If you are unsure of the difference between a amplifier and a receiver, you can read about it here. 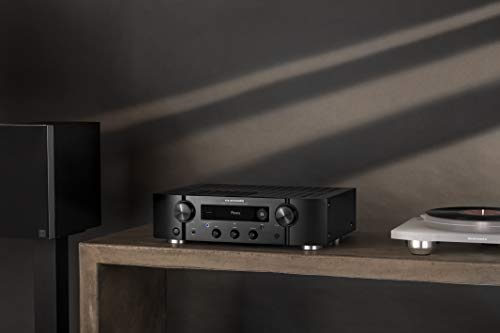 The Marantz PM7000N integrated amplifier is one of several excellent-sounding audio products that condense the audiophile landscape into something more accessible without compromising quality.

In addition to its many features and versatility, the PM7000N has enough power to power most speakers. It delivers 60 Wpc into an 8-ohm load and 80Wpc into a 4-ohm load.

Because it includes AirPlay, the PM7000N may be used as a Roon zone, making it very convenient. The DAC supports 24bit/192kHz and DSD5.6, which is plenty for my whole digital collection.

There’s no need to add any extra cable because WiFi is incorporated into the machine, although Marantz supplies an Ethernet connector just in case.

The PM7000N will have no trouble accessing shared music folders. However, browsing the directories on Marantz’s little screen can be slightly difficult.

If you want, there’s also Google Assistant and Alexa. Finally, there’s Internet radio, as if all of this wasn’t enough.

Marantz joins the streaming world with the PM7000N without abandoning the Marantz history and dedication to sound and the design innovations created here.

Fast, detailed, rich, and most importantly, well-controlled sound. It makes no difference if the PM7000N plays louder or softer music; regardless of your musical preferences, the PM7000N will wow you equally well, regardless of the complexity or genre.

Despite the lack of a huge picture, its soundstage is broad and deep, and the bass is rather basic than voluminous or ponderous.

Classical music, jazz, symphonic music, and any live recording sound great with this combination. But only on CD-quality files or greater because compression doesn’t remove airiness, detail, or sensitive articulation.

The Marantz PM7000N features a more mature sound than its predecessor, the PM7005. Its general character is still dense and hefty, but with more brilliance and dynamics, and via brightness and considerably greater dynamics, it has gained more strength, volume, and momentum.

There is no attenuation in the bass, which is clear and nicely controlled. In this price bracket, this is the most vibrant and energetic amplifier in the Marantz family. You can read more about if Marantz is a good brand here.

Here’s a sample of the Marantz PM7000N’s Sound Quality:

Without speakers, the PM7000N is meant to be a one-box solution. It may be dropped into a connected home and quickly assume command. Tone controls are included on the front panel of the PM7000N.

The Marantz PM7000N amp resembles most Marantz amps these days in terms of appearance. It’s a bulky black box with blue LEDs, a decent-sized but still little screen, a large input knob, a large volume control knob, and those tone-control knobs, similar to the newer Marantz PM8006.

A 3/4inch headphone jack is included, which is always a welcome addition. The front plate tapers significantly on the edges, giving the device a wind-swept appearance.

With its built-in DAC, the PM7000N considerably outweighs the PM6007 weight. However, the amplifier is more similar to the PM8006, an analog hi-fi classic, in body height, internal structure, and outputs.

It lacks its predecessor’s thick metal cover and the hefty triple chassis, but it has all of the other features. Additionally, it retains the Marantz design style while deviating somewhat from the standard.

There’s also a 0.25-inch headphone jack and EQ control knobs to tweak the treble and bass levels to fit your system and tastes.

Replace the batteries in the remote control.

Connect the amplifier to the speakers.

Connect the amplifier to the television (Optional)

Connect the power wire to a wall socket.

Connect to the internet

Enjoy listening to your audio through your TV and other platforms.

The Marantz NR1200 is a high-performance two-channel receiver developed from the ground up to give Marantz’s distinctive sound and an astounding power output of 75 watts per Channel.

Despite the receiver’s compact design being less than the height of a CD case. The Marantz NR1200’s amplification unit has been redesigned with independent, symmetrical left and right power amplifiers.

Each vital function has its windings powered by a centralized power source. That means the power transformer is routed separately from the amplifier, preamplifier, wireless module, and front display circuits, resulting in improved channel separation, reduced crosstalk, and improved clarity.

According to Marantz, the new Marantz stereo receiver also has two distinct DACs per Channel, which increases the dynamic range and improves the signal-to-noise ratio, resulting in crisper sound from lower-quality sources.

Marantz’s equipment is commonly believed to be the least stereotypically ‘Japanese’ sounding of the Japanese house brands.

Even when their budget amps weren’t hot-rodded by Ken Ishiwata, they emanate enthusiasm and drive that may be lacking in their more laid-back competitors.

Additionally, the Marantz provides the title track with enough energy and ferocity to engage you and get your head moving while also enjoying the extremely overlooked Deep Down and Dirty by the Stereo MCs.

When tested without the subwoofer, the Marantz indicates that part of the urgency comes from slightly lighter bass extension, which is primarily a favorable trade-off because it aids the impression of speed and overall get-up-and-go.

It has a very distinct bass that starts and finishes convincingly. It seems a little slim with a little sealed box speaker like the A1. It’s likely to improve things when paired with a cheap floor-stander, formerly the left and right speakers of a five-channel kit reused as a stereo pair.

The high-end is also instantly appealing. Rather than the very ubiquitous ESS Sabre, the NR1200 employs an AKM DAC.

Whether it’s due to this or other factors in the digital stage, the NR1200 manages to mix a little bright top-end with enough sweetness to keep even the worst recordings polished enough to appreciate.

Here is a sample of the Marantz NR1200’s sound quality:

In addition, the HDMI inputs on the Marantz display automatically rename themselves based on the information given by the source. You may use the TV remote to operate the Marantz NR1200 on a Smart TV. 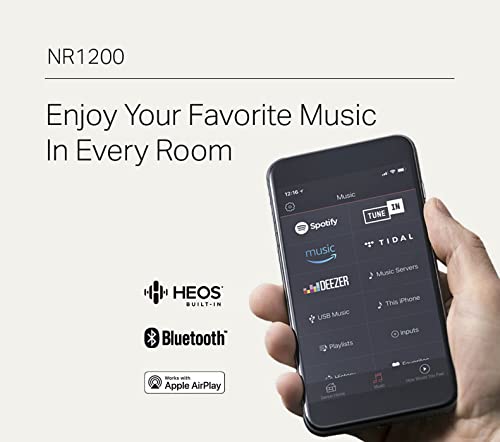 Its front panel of the Marantz even contains a USB connection. Major assistants and streaming services like Amazon Alexa, Google Assistant, and Apple Siri offer voice control. Coaxial and Optical digital inputs and a network connection are available on the rear panel.

If you have Bluetooth headphones, the Marantz NR1200 will broadcast to them, allowing you to listen to music wirelessly.

Its built-in HEOS for music streaming is also available on the Marantz NR1200. The Marantz NR1200 offers a full feature AM/FM tuner function if you wish to use old analog sources.

Using a moving magnet cartridge with the Marantz NR1200’s phono input may be used. There are three audio RCA inputs on the back panel: Zone output, pre-amp output, and twin subwoofer output. Speaker A and B outputs are available on the Marantz NR1200.

1. Choose the network you want to connect to from the list of wireless networks. If you cannot discover the network, you can rescan.

1. Connect to the network via your iOS device (iPhone/iPod/iPad). When you use WiFi to connect your iOS device to this unit, the unit will automatically join the same network as your smartphone.

3. Make sure your iOS device is connected to the wireless LAN (WiFi) router, then pick “Marantz NR1200” from the “SET UP NEW AIRPLAY SPEAKER…” menu at the bottom of your iOS device’s WiFi settings screen.

1. You’ll need a WPS-compatible router to connect via the push-button technique.

3. Enter WPS mode by pressing the WPS button on the router you wish to connect to. Each router has a different time for pressing the button.

4. Within 2 minutes, select “Connect” on the TV screen.

The Marantz NR1200 is a fantastic stereo receiver with about every function we could think of. It’s difficult to disagree with what Marantz has put up here if you know you’ll utilize them.

And one exception here is that more isn’t necessarily better than the PM7000N. The NR1200’s range of capability may be bewildering at times, and not every section received the same level of refinement.

Although the PM7000N is more expensive due to the added features and more power, I would recommend you choose that over the NR1200.

Got it!
X
Scroll to Top