If there’s one thing everyone likes about Marantz’s AV receiver selection, it’s their NR slimline series. They are designed for individuals with limited space who still want to build a full-fledged surround system rather than settling for a soundbar or other less-than-satisfying options.

Marantz is a fantastic brand that has been consistent with its annual model releases, virtually always featuring two models. And in this Marantz NR1510 review, you’ll learn everything there is to know to see if it’s the correct fit for you. 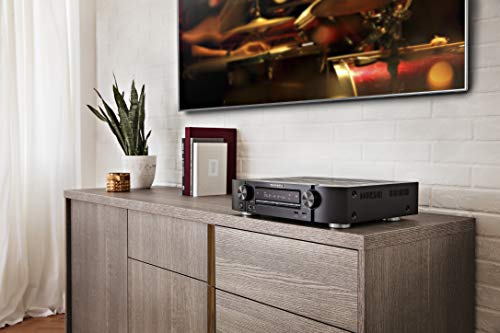 The NR series appears to have a few similar qualities, and the NR1510 follows suit. The unit has 5.2 channels of built-in amplification, which is the very bare minimum for a rudimentary surround sound system.

Marantz’s nr1510 only supports Dolby TrueHD and DTS HD Master Audio; there is no Dolby Atmos or DTS:X, and no up-mixing or virtual technologies are available.

The final result is a fairly simple solution that is more than enough for newbies and casual users. Because the Marantz NR1510 can only support 5 channels, some of these virtual technologies might enhance the system, but they are most likely deleted to keep the cost as low as possible.

Because there are no above speakers, the first apparent thing is that the overhead layer is absent, making the soundstage feel less dimensional.

Both major channels exhibited excellent clarity and sharpness, with the center channel providing clear conversation even during intense action scenes.

The three front channels combined produce excellent frontal dispersion and separation. With bullets flying, the surround speakers offered the required depth behind us, and the film provided plenty of opportunities for them to stretch their muscles.

The channel changing between the surrounds and the front speakers is excellent, and we never felt the receiver lag.

The three channels in the front took the lead, offering decent side extensions to the TV, while surround activity pushed the immersion bubble further behind us, enveloping us in action.

Movie dialogues are crisp and never seem overwhelmed by the action, precise mid-range, and thrilling highs with a strong and consistent bottom-end.

After testing a number of the NR versions and how loud the device can get, the NR series all have a channel power limit of 50 watts, which is lower when using all channels at once.

But because this receiver will largely be utilized in compact spaces and living rooms, and the distance is rather short, you might not likely have any problems enjoying a loud soundstage, unlike the Marantz PM8006.

It cannot compete with the power of full-sized units, but it can reach pretty high for what it is, so you shouldn’t be too concerned.

Another feature that seems to be becoming standard across the board, at least for all Marantz AV receivers, is support for High-Resolution Audio, with the NR1510 featuring the same support as the rest of the models.

The unit supports the usual low-quality MP3, WMA, and AAC formats and high-quality FLAC, ALAC, and WAV file up to 192 kHz/24-bit quality, with included DSD streaming support for both 2.8 and 5.6MHz

The NR1510 performs similarly to the other NR models we’ve tested in terms of performance. Having the same features and hardware meant no difference in quality.

Whatever the Marantz NR1510 lacks in power, it makes up for in quality. The highs had a lot of clarity, and the lows were punchy but not at the expense of the other sounds.

As with other NR models, certain requirements must be followed for these units to do what they are designed to provide truly. Power requirements are reasonable.

If you don’t need a very powerful receiver , the NR1510 can truly shine and provide some of the greatest surround sounds a receiver can provide. If you stick to it, the NR1510 will reward you with its capabilities.

One feature that stands out about the NR series is their ultra-slim designs, which allow them to fit into tiny spaces where a standard receiver would not.

AV receivers aren’t often the most appealing pieces of audio equipment. The NR1510 is a more appealing sight than most of them, which have a dull and unsightly black squarish box design.

The NR1510 is identical to its bigger sibling, the NR1710, and previous NR models. There is no discernible change. Therefore, identifying which unit is just by glancing at the exterior shell will be difficult.

If you arrange the antennas horizontally, the device will measure 17.3 inches x 14.9 inches x 4.1 inches and gain some height while maintaining a decent signal.

The Marantz nr1510 is compact and lightweight compared to other surrounding receivers, weighing only 18.1 lbs (8.2 kg).

The NR series is smaller in size, but when it comes to front-facing controls and connections, it is fully equipped and doesn’t lack anything that the larger and higher-end versions have.

The NR1510 has the same design principles as the NR1510, with two large rotating knobs on each side for volume and input selection, and a central display displays all of the critical information.

Only the power button is located under the input selection knob, while below the center display is a single row of narrow buttons divided into two groups.

Finally, behind these buttons are a few front connectors, including a headphone jack, an Audyssey calibration microphone port, a USB port (5V, 1A) for external storage connectivity, and an HDMI input on the right. Everything else is in the rear.

Of course, it lacks the high-end audio components found in Marantz’s higher-end models. Still, even so, the NR1510 has a high-current low-profile power amplifier section with identical power on all five channels.

Additionally, low-impedance drive capability for superior speaker control demonstrates that Marantz is paying attention to its most basic models.

All input buttons, including Bluetooth and HEOS features, are clustered together at the top of the remote, while channels, volume, and navigation control buttons are located directly below.

Below them are a trio of playback buttons and four smart choice buttons, which allow you to remember your custom input, volume, and Audyssey configurations.

At the bottom are four buttons that regulate the Marantz NR1510’s multiple sound modes. A good and practical remote with nothing special to offer.

Marantz could probably make a more compact design with this much room. The NR1510 is the least powerful of the bunch, yet it meets the company’s quality and aesthetic criteria.

I also recommend you check out the Marantz PM7000N vs the NR1200 comparison here.

When asked, choose your preferred language, follow the on-screen directions to set up the speakers, network, etc.

For increased operability, this device comes with a Graphical User Interface.

You may do a manual setup when manually establishing the speakers or adjusting settings in Audyssey® Setup.

And you can do a manual setup whenever you need to without modifying the parameters. A few other things you can tweak to your liking include:

Position the Sound calibration microphone in several spots throughout the listening area to do a measurement. As illustrated in the figure, we recommend measuring in six places for optimum results.

For more detailed information about the procedure for speaker settings, you can visit this website for step-by-step instructions. It includes which settings to tweak during the setup and many more to give you the best experience possible.

The Marantz NR1510 is targeted toward a niche audience. Its tiny size is its most clear advantage, with 5.2 channels, 50 watts of power, Dolby TrueHD, DTS HD Master Audio, High-Resolution Audio compatibility, HEOS, Airplay 2, and all voice control platforms to play with.

Dolby Atmos and DTS:X are not essential if you want to make a simple 5.2 channel surround setup owing to significant space constraints, and the NR1510 will fit you wonderfully. With its compact profile, it’s a receiver that will most likely fit any place.

There is also no compatibility between Dolby Atmos or DTS:X and any up-mixing and virtual technologies that are found in even low-cost full-sized receivers.